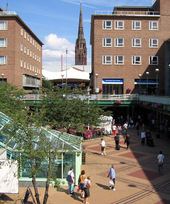 Coventry is located in the heart of England, conveniently served by Birmingham and East Midlands airports as well as the London airports. We are conntected to London Euston by an hour train ride.

The best connection is from Birmingham Airport. Take the Rail-Link to Birmingham International Station which is connected to Coventry main station in around 20min intervals.

Other options are the ariports in London (Heathrow, Luton, Gatwick, Stansted), all of which are connected either by train or bus/coach to Coventry in 1-2 hours. Finally, you might also consider the East Midlands Airport in Leicester, which has a number of budget connections, in particular to Middle European destinations including Poland, Hungary and Latvia.

The relevant stop is Coventry main station. There are convenient connections from London Euston served by Avanti West Coast trains.

The Centre for Fluid and Complex Systems has its home in the Design Hub which is part of the Technology Park of Coventry University. It ios located only minutes away from Coventry station and close to the city centre. For walking instructions to the Design Hub, consult the map below. The conference itself will be held in the Engineering & Computing building which is within walking distance of the Design Hub as shown on the map below.